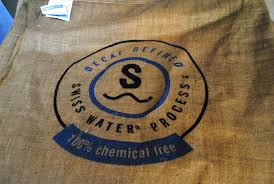 The Swiss Water Process (SWP) is a non-solvent method for decaffeinating unroasted coffee beans. It was introduced by Coffex in 1979 and was, at that time, the only commercial decaffeination method that did not use solvents. The Swiss Water Process has quickly become one of the most popular methods of decaffeinating specialty coffee.  It is not so called because the water itself is Swiss, but instead because the process was developed in Switzerland.

In this process, the coffee beans are soaked in cafeine free green coffee extract so that the caffeine is extracted from the bean and into the water yet the flavor components remain.  The now caffeine saturated green cofee extract is then processed through activated charcoal to remove the caffeine and thus becoming caffeine free again ready to extract caffeine from a new batch of coffee. The coffee beans are then dried to their originating moisture level and re-bagged. The Swiss Water Process results in coffee that is 99.9% caffeine free.

In other methods of decaffeination, the caffeine is recovered from the mixture, and sold separate from the coffee.  The only way to capture caffeine is through the introduction of some sort of volatile solvent (methylene chloride or ethyl acetate) such that the caffeine will attach to the solvent and then be dehydrated.  However, in the Swiss Water Process, no chemcials are used, therefore the cost of this process is slightly higher than other solvent-based processes.